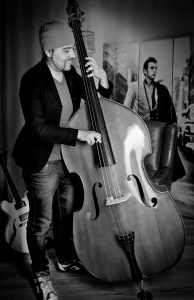 Erick Paniagua was born in La Paz, Bolivia, on 11.02.1975 and made his first musical steps at the age of 6. Coming from a family of musicians, the Bolivian first learned autodidactically, then from his mother and members of the family and soon took part in occasional musical contributions within the family, at school and in church. There, of course, he was particularly interested in Latin American rhythms.

At the age of 11, Erick began taking lessons in classical guitar with the then well-known Bolivian guitarist Edgar Navarro. At the same time Erick performed with his first rock band and gained a lot of stage experience as a member of different formations.

After graduating from high school in Sucre, Bolivia, the journey across the Atlantic to Germany followed to meet his father, who musically motivated and supported Erick from the beginning. He soon met numerous musicians from all over the world and was immediately recruited by them as members of various projects. These encounters inexorably shaped Erick further and laid the foundation for his later musical career.

Finally, after learning the language, successfully completing the German Abitur and passing the entrance examination, Erick began his musical studies at the ArtEZ Conservatory in Enschede, Netherlands, with the main subjects guitar and bass. The education included a variety of subjects, such as pedagogy, ear training, harmony, and music history among others, which not only promote his own musicality, but also enable him to work as a music teacher.

Erick currently teaches guitar and bass in various institutions and privately and is a member of several projects with which he has travelled all over the world.

Following the motto; „music is like living on a small scale“, the Bolivian-born musician would like to pass on his knowledge to as many young people as possible.