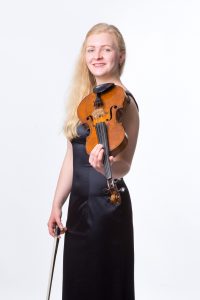 Ekaterina Baranova was born in 1987 in Saint-Petersburg, Russia. She had her first violin lessons at the age of 5 years. At the age of 13 she won the first prize at the national competition and since then she has played her first concerts as a solo-artist in the orchestra. In 2007 she graduated from the Rimsky-Korsakov Music College with distinction and began her studies at the St. Petersburg Conservatory. She completed her studies in 2012 with distinction. From 2008 to 2011 Baranova worked in the orchestra of the Saint-Petersburg State Orchestra. In 2011-2012 she was concertmaster of the orchestra ‚Capella Taurida‘ and member of the ensemble ‚Divertisment‘.

Since 2006 Ekaterina Baranova has been musically active worldwide, and has participated in numerous renowned music festivals and master classes, including the Bayreuth Festival of Young Artists (2009-2010), where she was employed as concertmaster and soloist of the Festival Orchestra, Schleswig-Holstein Music Festival (2011), Festival de la cultura 2016 (Sucre, Bolivia).

Since 2012 Baranova lives in Münster, North Rhine-Westphalia. She is currently completing her master’s degree at the Music College in Münster.

Since 2014 she is a scholarship holder of the Yehudi Menuhin Live Music Now Association.

Ekaterina Baranova performs as a soloist and member in various chamber music ensembles in Europe, Russia, China and South America.